Today our little liter puppies turn 28 years old, or for those that aren’t good at division – four years old!  I remember when we bred Tiamo…. 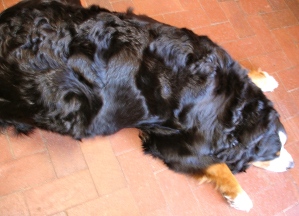 We had located a male Berner that was intact and waited until Tiamo was two years old, we had done all the tests and sent them off to OFA for evaluation. The wait was on for Tiamo to enter into her heat cycle.  Right before 4th of July she was ready!  Talk about fireworks, we brought her to her new boyfriend and it was love at first sight.  Five weeks later, I brought Tiamo to the vet for an ultrasound to confirm her pregnancy.  I was told she would have four pups and she should have her little ones around Labor Day. After the vet visit, I stopped at the pet store and bought 4 little collars wrapping them in tissue.  When we got home, Tiamo carried the tissue wrapped collars right up to Malcolm and dropped the package onto his lap.  She then nudged Malcolm in the leg until he unwrapped his gift.  It only took a nano-second for Malcolm to figure out it was official.  Tiamo was pregnant!  Both Malcolm and Tiamo had huge grins on their faces!

Tiamo had an easy pregnancy.  Every night while she was preggers, she would crawl up next to me, snuggle in, roll over and get her belly rubbed.  As August inched closer to September, Malcolm and I built Tiamo a whelping pen,  got towels and blankets ready for the big event,  and waited.  I counted the days off on the calendar so we could narrow down the date she should go into labor and prayed I would be home when she started.   Tiamo was getting bigger and bigger and bigger.  She was so uncomfortable that for the first time she couldn’t get up on the couch.  I resorted to laying down on the hard brick floor with her to rub her belly.  I wanted her to have a normal birthing experience.  I had read horror stories of dogs going into labor at 2 in the morning.  I read about emergency c-sections and puppies not making it.  I think Malcolm and I were more nervous than Tiamo was.

The first Friday of September, out of the clear blue, Tiamo crawled into her whelping pen.  She sniffed all the corners, rearranged the blankets and slept in the pen all night.  She knew the pen was for her!  The next morning, she started doing the nesting routine and at 9:00 a.m. her water broke.  Bless her heart, our sweet mama had waited until mid-morning on the weekend to have her little pups.  Within an hour, the first pup had been born, hale and healthy.  Tiamo instinctively did her job.  Every hour hence, Tiamo’s contractions would push a new little pup into the world.  At 1:00 p.m. she was done.  Four girls!  Licked clean and learning how to nurse.  Tiamo welcomed her little girls into their new world and settled into motherhood.  About three hours later, Tiamo started getting restless,  turning around in circles and being agitated.   Lord have mercy! she was having another puppy, and another and another and another!  Again, like clock work, every hour, another puppy would arrive.  Eight!  She had eight puppies!  Seven girls and one boy!  All this time we thought she was going to keep it at four!  Mother and puppies were all healthy and doing great.  They all were nursing, they all were warm, they were all clean.  The puppies were weighed and documented and were sound asleep.  We were exhausted.

Tiamo was the proudest mother.  She loved showing off her brood.  The neighborhood was so excited we had to set up visiting hours.  Tiamo stayed with her liter all day and night except for when she needed to go outside.   The puppies were rapidly growing and getting more active.  By week two their eyes were starting to open and by week three, Shasta (aka Amore) was trying to climb out of the whelping pen.  Life as we knew it was over!

We had homes for the first four puppies, however, we were now scrambling to find placement for the others.  By the second week of November, the puppies were leaving for their next adventure.  All but two pups had families eagerly waiting for them. We had always planned on keeping one of Tiamo puppies and now we had two.  Shasta and Pinkie. Amore and Dolce.  We would find a family that wanted a puppy and for some reason or another, at the last-minute they wouldn’t be able to take her.  A week turned into a month, around Christmas time, Malcolm and I looked at each and knew we couldn’t give away our extra little girl.  We decided to keep two puppies! It was a Christmas gift to ourselves.  A type of  “to-me-from-me” present.   Three dogs:  Mama and her two adventurous puppies!  All spoiled!  Wow!  Little did we know the upheaval three dogs would bring!

Would we do it all over again?  may be not.  Would we change one second of the last four years?  Never!  Tiamo and her two little girls have brought so much joy into our lives, so much adventure, so many smiles to our hearts.  Malcolm swears if we ever win the lotto, he is going to get 10 Bernese Mountain Dogs and breed every one of them.  To Tiamo’s last day, she received a daily belly rub.  To this day – Happy Birthday Girls!