The best sandwich starts with two substantial slices of still-warm from the oven, crusty bread.  I never use that day-old bread crap often buried in your mom’s chest freezer.  Found six months later, the loaf’s slices have already started to show off their curled corners.  With ice particles clinging to the outer crusts, the bread slices are separated and thinned from their once highly advertised, don’t squeeze the bread bag, freshness.  What I’m talking about is a hearty bread with a crust worthy of a sandwich.  Perfect tops and bottoms, perfect bookends to hold all the flavorful goodness of your sandwich makings together.

The best sandwich always has some sort of special sauce.  Generously spread on the inside flanks of the sliced bread, it might be a garlicky aioli, or a spicy brown mustard, or perhaps a savory chutney.  An oniony jam, a cranberry-brandy marmalade, a citrusy-fruity preserve, are all considered for their deliberate culinary palates.  The special sauce is an integral part of the whole sandwich package, a succulent pairing of tang and piquancy.

The best sandwich has complementary enhancements.  Such as Romaine lettuce, a thick slice of “tamatah” from a dark reddish-purple hued Beefeater, or some roasted green chili peppers.  Augmented with a wedge of peppery jack cheese or some smoked Gouda, and you’ve just increased your sandwich stack with both subtle flavors and added height.

The best sandwich has a mountain of tender, thinly sliced meat.  Usually left over from last night’s dinner and stacked in the middle of the sandwich with folded precision.  The sandwich is best when layered with beef steak that has been grilled over aged and seasoned oak logs, finished to a medium-rare redness and has a light dusting of seasonings still sitting on it’s outside edges.  Or perhaps some residual roasted turkey from Thanksgiving dinner.  Or maybe some BBQ’ed boneless pork loin chilled in a mustard sauce.  In any case, the main entrée of the sandwich, the meat, is the key principle in any double-decker and the center piece of any sandwich arrangement.

Some might think the best sandwiches are bestowed with specialty side lineups.  A scoop of homemade potato salad or a small cup of minestrone soup. But for Malcolm and I, we have a totally different idea of the best sandwich.  Our view of the perfect sandwich doesn’t need any of the above …..

You see, for us, we would rather be sandwiched in between our two girls, Dolce and Amore.  Folded in the middle by 100 pounds of fur on each side, we call it our Berner sanwich.   The Berner Sandwich is generously spread with a huge dollop of canine kisses, drool, and enhanced with paw pats and nose nudges.  Add a wedge of dog hair, some slices of doggy love and you have the best dog gone sandwich ever.  The Berner sandwich! 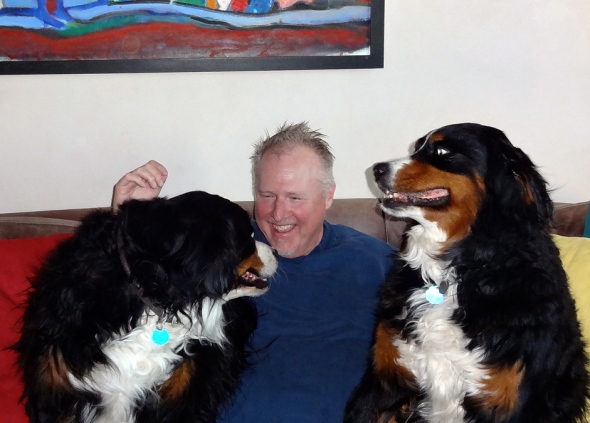 Now, that is the best sandwich ever!

Be sure to drop some steak ends on the floor for your four-legged beasts.

In a small saucepan, saute’ garlic in olive oil over moderately low heat, stirring, until softened.  Cool. In a small food processor or blender purée tomatoes, basil, oil mixture, and vinegar until pesto is smooth.  Set aside.

A sock goes missing.  Pens disappear.  Keys that were just in your hand are gone.  Eyeglasses lost.  The creamer that you placed on the kitchen counter after pouring yourself some coffee, vanished.  Your cell phone misplaced. The next scene shows you scratching your head as you wander around your house looking for the no-where-to-be-found items. Geez, you just had’em, where could they be?

You’re not senile, you’re not losing your mind, it’s not loss of memory, but damn, where could they be?

In my case, it was my cell phone.

On a work day.

I checked my car, under the seats, between the console looking for my missing phone.  I re-checked my purse and all its pockets that has been my designated personal filing cabinet – no luck.  I’m not crazy, I just placed my whole connection to my life, my friends, my business associates on the table and now it’s  gone.  AWOL.  At first I was puzzled.  What did I do with my phone?  I just had it.

I retraced my steps, back tracked in my mind the rooms I had just been in.  I checked the coat I were wearing last, under pillows, behind cushions.  No where.  I patted down my back pants pockets, my front pockets, my chest pockets (phone shelf) and came up empty.  I grabbed my husband’s phone and dial my number only to hear nothing, not a peep.  I forgot that I had shut it off.  My photo album, my phone book, my email list – gone, gone, gone.  Now I was getting anxious.  Where was my phone?

The clock was ticking and I needed to be on my way to work.  I needed my phone.  I had a committee meeting and wanted to be a little early to work to set up the conference room.  I still had a little time but wanted to be on my way.   Amore was picking up on my anxious state, following me as I went from room to room hunting down my cell.  Dolce was nowhere to be found.

I have to admit, especially since I am talking a lost phone, I went from puzzled to anxious to frantic in about 60 seconds flat.  Maybe less.  The sounds from my heels tapping against the brick floor started clicking faster and faster in my desperation to locate my cell.  I was in frantic mode.  Amore was stirred up.  Dogs seem to pick up on their human folk’s emotional state and Amore had zeroed in on mine.  She started to run through the house barking her way from one end to the other.  Her barks were a beacon for Dolce, calling her in from the outside.  It’s standard procedure between the two of them, if one dog barks, the other will join in the chorus singing back-up.  The duet woke up Malcolm.  Crap!

“What the hell is going on?” a blurry eyed Malcolm growled.

“Can’t find my cell phone,” I tersely replied.  I was frustrated.

“Try the pen.  Dolce has been frantically coming in and out of the pen for the last 15 minutes, making a racket with the dog door” he mumbled as he rolled back over in bed, pulling the covers up and over his head.

The only common wall between our dog pen and our house is in our master bath.  In our infinite wisdom, we placed the dog door in the bottom half of our linen closet in the bathroom.  It was brilliant move on our side.  The dog door is discrete, tucked inside the closet.  We can close it off any time, putting the lower shelves back in place and we can shut the door to either lock the dogs outside or in, depending on the situation.  It was also a stupid move on our side.  During the monsoon season of the summer months, Amore and Dolce track in mud and muck throughout the bathroom and into our master suite. During the winter months, they track in snow.  And, the worse of it, we hear the girls coming and going as the door flap swishes back and forth and back and forth.  Of course Malcolm heard the loud swish and swoosh as Dolce entered and left through the door as he laid in bed.

I trooped around the back to the dog pen, Amore and Dolce following close at my side.  Yep.  there lay my cell phone, under a dog-tagged bush.  Thankfully unharmed, unscathed.  Dolce was the culprit.  The phone perpetrator.  Our thief.   There was the beginnings of a hole being dug to the left of my phone.  Fresh dirt nosed into a small pile, letting me believe the evidence that Dolce was going to bury her prize, my phone.  That might have been a first, a dog buried cell phone. Her muzzle still had a sprinkle of dirt around the nose.

I wasn’t in the mood to laugh about it.  I snatched up my phone, wiped off the remaining dirt and hi-tailed it to work.  Later, after my committee meeting, after I was home from work, after my sense of humor kicked back in, I could chuckled over Dolce and the black hole.  Later, Malcolm and I would have a hoot over what else might be buried in the dog pen, laughing about what else is missing.

Now, when something is missing, the pen is the first place we look.

Next week is Valentine’s Day, celebrated by couples around the world.  A busy day for florists and candy shops, a busy night for restaurants, bars and clubs.  A day ladies hope for flowers, a night young men hope to get lucky.  Malcolm and I still like to celebrate Cupid’s famous day, but with dogs, it is easier to stay in, then travel into town for an expensive meal.  We would rather commemorate our love with a special meal, cooked at home with our dogs at our feet.  A little wine, a warm fire, a delicious meal.  A stray dog hair.

Enjoy Love’s Special Day with your special one, dogs are optional!

Share your heart with your favorite person (or dog!)

Butterfly the filet steaks by slicing through the steaks horizontally but not slicing all the way through.  Open up the steaks and shape into a heart.  Season both sides with salt and pepper and set aside.  Do NOT leave unattended on the counter – known to disappear by four-legged thieves.

Shape into a heart

Fire up your BBQ grill to medium-high heat.  Place the  steaks on the grill and cook to desired done-ness, about 5 minutes per side for medium-rare.  Transfer steaks to a platter and cover with foil.

Melt the remaining butter in a large skillet. Add rosemary, then the sauce and the remaing 1/2 cup of beef broth to the skillet.  Bring to a boil, scraping up browned bits.  Season lightly with salt and pepper to taste.  Spoon sauce of steaks and top each steak equally with the Gorgonzola crumbles.

Grilled to the perfect done-ness