One of the great things about hosting a blog are the friends you make.  Virtual friends.  Blog buddies you probably will never meet in person but interact with on-line.  You exchange comments and replies.  You “like” their post.  You even reblog from time to time.  There aren’t any long winded phone calls to keep in touch.  Just short blog messages, and smiley faces.  LOL comments and a few LMAO remarks.  We “oooh” over photos of beautiful Ms. Harper Lee, a Golden Retriever from Louisana, from Thek9harperlee blog and “ahhh” over pictures of Colorado from Mike’s Look at Life blog.

When my cookbook was just off the press, I asked a fellow blogger, PAWS IT ON, to sample some of the recipes and write a critique on her findings.   When I started to follow a traveling wine and beer blogger, The Wandering Gourmand, I asked him to “pair” a beer with three of my soups.  I would like to think a friendship of sorts was started. A virtual friendship.  I know if any of the above mentioned ever found themselves in New Mexico, aka Santa Fe, I would love to meet up with them and have a LIVE conversation.

yes, my fish n’ chips looked just like this!

Fish n’ Chips was our first pairing course.  Malcolm and I dusted off our stored-in-the-garage fryer and proceeded to inhale a double batch of homemade beer battered fish with some spicy french fries.  Delicious!  It brought back memories of London.  And Brighton Beach.  And Bath.  And York.  And all the pubs we visited while in Great Britain.  There is nothing quite like the Brits’ fish n’ chips!

Our next pairing contest was Shrimp n’ Grits.  More like a test – not contest.

Hubby-dear is from Georgia. Atlanta. Inside the belt. Buckhead, which he considers Atlanta proper. Not those suburbs like Marietta, Decatur or Alpharetta.  We’re talking Atlanta.  A true southern boy. When I mentioned we were having Shrimp n’ Grits for our weekend feast to test out the perfect pairing, he sent me a stern look.

grits IS NOT polenta!

“Now Honey,” he said, “Grits IS NOT polenta!” Clearing indicating a West Coast transplant to New Mexico would not know the difference. He had a point. My first trip to the grocery store brought home corn meal. Oops!  It was a Lucy & Ethel moment.  I thought I grabbed the grits, I swear! I didn’t realize my mistake until I had the corn meal cooking on the stove top and it wasn’t thickening properly.  Yikes!  Company was due in ten minutes.   Like Malcolm said, grits isn’t even close to corn meal.  A first cousin and married, but according to Malcolm, Grits is not Corn Meal! I think Malcolm was most grumpy mainly because he was elected to run back into town to get the real deal.

We already had some fun beer in the frig, and our guests had volunteered to bring an appropriate wine. We were ready to sip and sample.  One of our invitees is a cider drinker, so at the last moment I added Stella Artosis Cidre  in the pairing line up.
Our sampling included a Fox Glove Chardonnay, a Spanish wine, Licia Albarino, and finally, Stella Artosis Cidre (made with handpicked apples).  Along with an assortment of beers, we were set.

WOW! Not only was the Shrimp n’ Grits totally fantastic, we had one of the best times sippin & samplin!  We had a pairing party to end all pairing parties!

The top choice was the Stella Artosis Cidre, with the Albarino a close second. I gotta tell ya, the Cidre was perfect with the Shrimp n’ Grits. Crisp with a hint of carbonation, it was the perfect foil for the slight heat of the sausage. I’m sure it’s the “hand-picked apples” that made the difference! 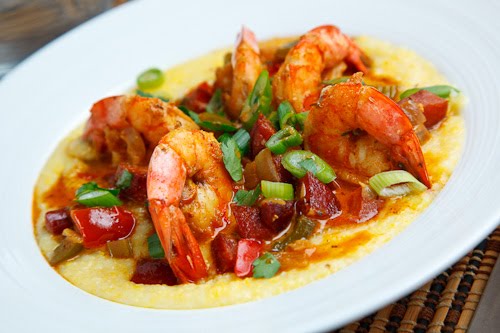 Combine hot sauce, wine, onions, lemon juice and vinegar in a heavy medium sauce pan. Boil over medium heat until reduced to 1/2 cup.  About 15 minutes.  Stir in cream.  Cover and refrigerate.  Can be made one day ahead.

Heat olive oil in heavy medium skillet over medium heat.  Add sausage bits, onion, jalapeno and garlic.  Saute until onions and garlic are tender.  About 10 minutes.  Add tomatoes and seasoning.  Stir and heat over low heat while grits are cooking.  When grits are close to being ready, turn up the heat and add uncooked shrimp, sauteing until shrimp are opaque in center, about 3-4 minutes.

Bring chicken broth to a boil over medium heat.  Add 1/4 cup butter and S&P.  Gradually whisk in grits.  Cover and let simmer until grits are thickened and very soft, stirring often.  About 1 hours.  If using quick grits, about 5-10 minutes.  When grits are done, add rest of butter and cheese.  Season if needed.  Keep warm.

Spoon grits in swallow bowls forming a well in the center.  Spoon shrimp/sausage mixture over grits and drizzle the hot pepper cream sauce over.  Serve.