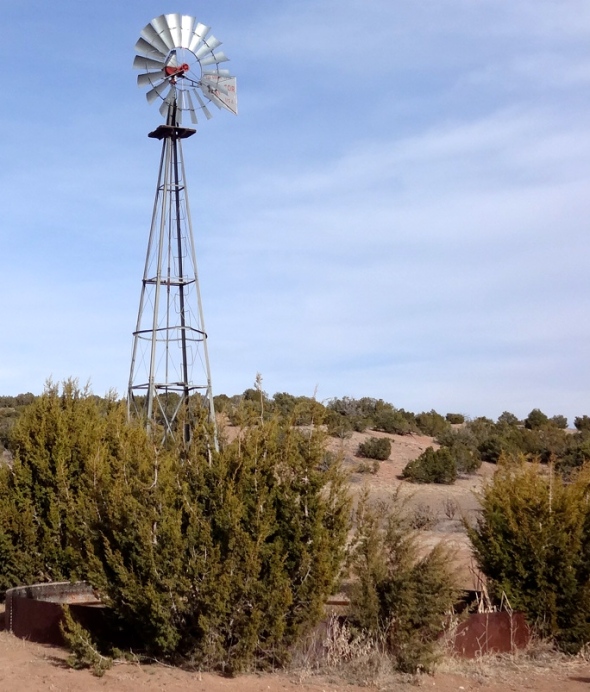 tilting at the windmill

The Galisteo Basin Preserve was once a large cattle ranch.   It is miles of cow trails, rutted dirt roads and nature.  Old cowboy camps and lean tos dot the countryside with broken-down foundation remains and falling-down corrals.  A dry river bed runs through the ranch, it’s eroded banks reaching as high as twenty-to-thirty feet above the sandy river floor in some places.  I know of three windmills with water troughs at their base, their blades creaking against the wind as the pump struggles to pull up water for the trough.  All combined, it is a rustic reminder of its western heritage and the old frontier.

Just a few miles from our home, the GBP is now a hiker’s mecca.  It’s a horse and rider’s trail workout and mountain biker’s nirvana.  It’s where we take the girls for their daily walks.

Our first few experiences at the Preserve were riddled with adventure.  As Amore scouted for lizards, Tiamo trotted along sniffing every low hanging branch there was.  Dolce stayed at our heels.  New trails brought new scents and the girls would scatter about to investigate the foreign territory.  Once or twice we will catch sight of a coyote, several times we have crossed paths with snakes.  We’ve seen evidence of antelope and deer and have heard of sightings of mountain lions.  The easy access to water makes the area ideal for wildlife.  And koi.

The dogs had a habit of drinking the trough water at the tail end of our hikes.  Though we packed water with us to keep the girls hydrated throughout our walks, they like the cold, fresh from the well, water.  We make a point to stop at the troughs before loading up into the car, allowing the girls one last sip.

It was on a cold, drizzly January day, the wind kicking up due to an incoming storm, when we were trying to get a quick walk in before being hit with the impending deluge.  As we finished our hike and neared the water trough, Tiamo ran ahead to get her fill.  At the edge of the trough she stilled, looking intently into the darkened mossy water.  We saw she was tracking something but had no idea what.  Her quick eyes had spotted movement and she was on it. Waiting just a few seconds, she moved her head in a little circle and before we knew it, leaped over the rim into the water trough.  Icy cold water splashed heavily over the sides.   Large water droplets landing on both Malcolm and I.  Cold, freezing ucky water  soaking our sweatshirts.  The wake of her splash landing on our boots.

“What the hell?” Malcolm shouted.  With a death grip, I grabbed on to the collars of Amore and Dolce, the only foot-loose canines left on dry land.  I wasn’t about to let Amore and Dolce follow into the trough along with mama.  Malcolm scrambled to get to Tiamo.  Once in the trough, Tiamo didn’t want to get out.  She had more fish to fry.  Literally.  Namely the koi hiding deep in the bottom moss of the water tank.  Tiamo had gone fishing.

As I held on to the girls, Malcolm struggled to haul Tiamo out of the water.  Jumping in was much easier than climbing out.  The rim was nothing more than a sharp torch-cut metal edge, hurtful for Tiamo to balance her paws on to jump out.  The weight of the water, the slippery moss-covered bottom hindered her escape from the cold water.  She was stuck.  She was completely soaked, now trembling from the frigid water.   The koi forgotten, she wanted out.

There was no two ways about it.  Malcolm was going to have to lift her out.  He was going to have to reach in the finger-numbing icy water to pull Tiamo out.  Cussing like a sailor, Malc stripped off his jacket and sweatshirt, pulled off his gloves and plunged his arms into the water, encircling Tiamo’s belly to heft her out of the water.  100 pounds of basically full on dead weight – this was not going to be an easy feat.  As she was clearing the water Tiamo panicked.  Back legs kicking, front paws scratching Malcolm’s bare torso, Tiamo twisted and turned for freedom.  Malcolm and Tiamo landed on dry land but both were soaking wet.  And freezing.  And stinky from the stagnant waters.  Malcolm was covered in stinky mossy uck.  Tiamo just stunk.

Needless to say, I drove home, Malcolm sat in the back with the dogs.

4 thoughts on “the fisherman”