We had our first snow of the season last Sunday. Not much. Not like what they received back East anyway.  Maybe two inches. In Santa Fe, two inches of snow is enough to shut down the entire City Different.  If we’re fortunate for the snow to fall on a school day, it’s a bonus day of sleeping in a few extra hours and driving in to work at a later hour.  Government offices and schools then follow a delayed schedule. Four inches of the white stuff will see me working from home for the day.  Malcolm and I live outside of Santa Fe and the few token snow plows never seem to find their way out to us.  It’d be different if one of our five esteemed County Commissioners were a close-by neighbor.  Sadly however, that’s not the case.  Hence, we suffer through snow-covered roads and are dependent on the sun melting our way to town. 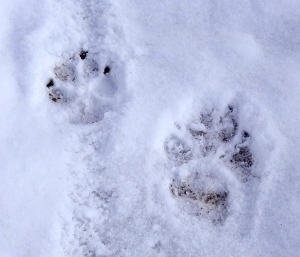 Dolce was in heaven.  Dog heaven. Doggy snow heaven. Our furry little snow bunny immediately ran to find a gentle slope to toboggan down. Her enjoyment comes from plopping on her stomach, rolling over on her back, shaking her booty with a little wiggle to start the move and sliding down the incline.  Repeat.  Repeat.  Repeat.  Until she tires.  It’s never-ending.

Then there’s Amore.  She runs.  Just for the hell of it.  She loves to feel the cold snow on her paws, sniff out the fresh scents, bite at the snow as she speeds over the snow.  I wish I could catch on camera the times she trips over her two front paws while she tries to grab at the snow and run at the same time.  Head over heels, she shakes it off and runs again.  She just loves to run.

Amore is at her happiest when at full throttle, barreling down on us. On a good day, and if we are lucky, Amore will put on the front paw brakes within two inches from our knees. On those days when we aren’t so fortunate, we hobble back to the car after being wiped out from a 100 lb. beast.  Last Sunday was a good day.