Growing up we always had pets.  Cats and dogs mainly, with a token gold-fish thrown into the menagerie when the county fair was going on.  There were short-lived turtles and frogs and once in a while, one of us kids would catch a lizard and try to house it in an old shoe box, which usually ended up as a make shift coffin when the little guy croaked.

At one point we had a calico cat named Squeaker, so named as she didn’t meow, she squeaked.  My mother was of the school that animals, especially cats, weren’t allowed in the house, they belonged outdoors.  Except on Saturdays.  On Saturdays, Squeaker could come inside as long as we kept an eye on her.  She would sit under the coffee table in the living room as we ate our cereal and watched cartoons.  When the TV was turned off, Squeaker was put back outside.  As were we got a little older, we would sneak Squeaker inside the house after school while mom was still working, being sure to hide any evidence before she returned home.  We figured what mother didn’t know, didn’t hurt her.

Our dogs were the same.  They did not belong indoors and mother was very firm about that!  If we wanted to play with our canine friends, we did it out side.  We had a big fenced back yard that kept them off the street so they were presumed safe and sound.  All of our dogs were fed outside, watered outside and they slept outside.  Oh, we had a detached garage that our pets would hunker down in at night, but never in a million years were they allowed inside the house.  And god forbid, that they ever get on our beds or take a nap on the couch, or my heavens, leave some dog hair on the carpet. That was so not going to happen. Not in mother’s house.

And then Tibbers came along, a blue-eyed cow dog with no cows to work.  For the first few years, he pretty much stayed outdoors in the back yard, herding all of us as we walked in and out of the house. On cold nights, we would beg our parents to let Tibbers inside, sure he would freeze to death, only to have our pleas turned down.  At some point mother must have had an epiphany – or maybe a touch of guilt set in, she eventually allowed us to let Tibbers inside, but only in the utility room, you know, in case there was an ‘accident’.

As he aged, his allowable indoor territory increased to the kitchen and beyond to the dining room.  I once caught my mom with Tibbers laying by her feet as she watched television in the living room, way beyond his prescribed interior boundaries.  I discovered then that Mother had a soft spot for ol’ Tibbers.  Somehow, throughout the years, Tibbers had become my mother’s dog.  As each of us girls left for college, leaving mom, dad and Tibbers at home, mother and Tibbers had bonded.  For the rest of his years, mother would bring Tibbers inside at night but only in rooms with vinyl flooring.  That in itself was pushing it for my mom.  My mom just didn’t believe in indoor pets.

I have no doubt my mother would be appalled at our choice of allowing the girls indoors.  Not only do we let them inside, but to be honest, Dolce, Amore and even Gordita pretty much have the run of the house. Gasp!  My mother would be horrified.  They aren’t outdoor dogs. Never will be.  Gordita isn’t an outdoor cat, although she likes to prowl around the perimeters. They are part of our family.  They are allowed on the couches and sofas, the recliner chairs, the beds, even my lap.  We have dog hair and cat fur everywhere.  Our home is their home.  Our couch is their couch.

Yep, my mother would be rolling over in her grave at the thought of Dolce or Amore taking a little nap on the couch! 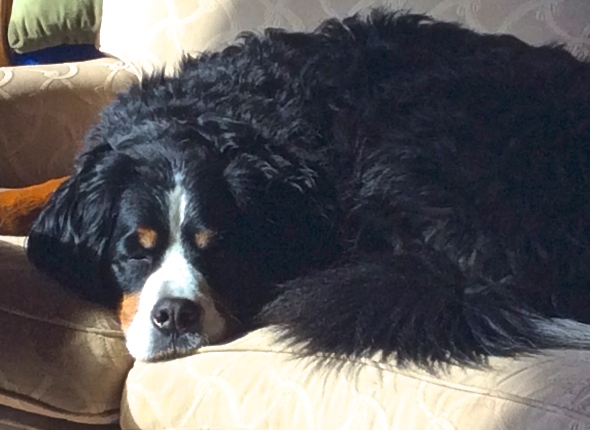