Over the years, Malcolm and I have watched jealousy fits spike between Amore and Dolce.  One has a bone, the other doesn’t.  Dolce is riding shotgun in the car, Amore wants to be.  Amore is on the bed, Dolce covets her spot.  Paws hold down the toy, growls are disposed, fights ensue, each dog is sent to their timeout corner.  Detention is given to the misbehaving mutts.  Treats taken away.

We have watched Dolce tense and snarl when Amore comes to close to her bone.  We watch as Dolce tucks her bone under her paw, her head lowering just above.  A deep rumble emits from her throat in warning.  Amore antagonizing Dolce over the treat.  Dolce fighting back.

We have seen Amore literally pushing Dolce off the front seat as they establish who will be riding shotgun.  Dolce scrunched against the car door as Amore thrusts her 100 lb. frame into the seat. Neither giving so much as an inch of chair up in ownership of the front, both fighting for supremacy over who gets to ride shotgun. 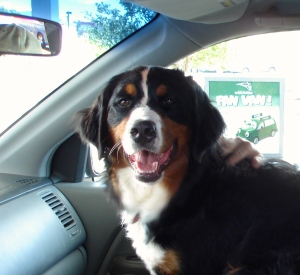 We chuckle over Amore keeping Dolce off the bed, refusing to allow her up on her reign of the soft mattress.  It usually takes Malcolm holding on to Amore so Dolce can jump up and grab a corner of the bed.

It’s a whole different story when the jealousy is between Malcolm and myself.  Oh yeah, we each sing a different tune then.

In the beginning, way back when we first had Tiamo, I wasn’t working.  I was an equal caregiver, getting up to feed our early riser, walking Tiamo around the loop to tire her for the day.  Malcolm had the evening shift. He would take her on another trek around the loop, and worked on Tiamo’s training. I gave her belly rubs and messages. Malcolm gave her rides in the car. Tiamo’s love was pretty much evenly dispersed between the two of us.

And then I got a job.

I still tended to the morning mutt chores, feeding the girls as I prepared for work.  I would give each dog some belly scratches just as I left to drive into town, leaving Malcolm with the girls for the hours I was gone.  Upon my return home, I had three eager dogs waiting for me to enter though the garage door.  Malcolm was like the proverbial housewife that hands over the baby when dad walks through the door.  He had the dogs all day, it was my turn to have ’em.

Slowly, as my days at work turned into years, I watched a pattern emerge.

I saw the girls getting more excited to see Malcolm than me.  I watched them scramble to head out to the garage as they heard the garage door pulling up, chomping at the bit to reach Malcolm before the other.  I only receive wagging tails once I am inside the house.  If we happen to stop at the store, I watch how vigilant both girls are, waiting for Malcolm to return.  Their eyes never leaving the front entrance of where he disappeared.  When I take them up to the grocery, I find them fast asleep in the back as I unload the cart.  I notice how Amore and Dolce look to Malcolm for guidance on our walks, running to him for treats, listening to him give commands.

I have to admit, there is a big, fat, ugly green-eyed monster sitting on my left and my right shoulder.  I am a little envious of this lop-sided affection.  Okay, I’m a lot envious.  Alright, alright, I’m flat-out jealous of how the dogs go to him first, how they go bonkers to sit by him, how they hang with him in the den at night rather than with me.  My pouts of “they love you more” are volleyed with “but I have  them all day” comments from Malcolm.  Obviously, my internal ploy to minimize their devotion to Malcolm isn’t working.

I’ve concluded Amore and Dolce might “favor” Malcolm just a little more…. but I love them more!  Ten times more! So there!