From behind me, I heard the soft ping of splatter hitting a hard surface.  Seconds later, another drip followed.   A sort of pling…. pling…. pling sound vibrated through me.  The drops of moisture I envisioned were quietly being announced by the audible drip, drip, drip sound coming from somewhere behind my back.   I was in the kitchen preparing dinner for Amore and Dolce, as Malcolm was away for the weekend.  When one of us is traveling, all household chores falls on the other.  Supper for the dogs being one.

I instinctively knew the kitchen sink faucet had bitten the big one.  Gone on to faucet heaven.  We’d been having trouble with our sink faucet.  The swivel arm was reduced to a “left-side” only rotation, the handy-dandy nozzle handle only pulled out about a fifth of its length, and the water pressure was down to a weak flow.  The week before Malcolm left was filled so full of busy, we told ourselves we would deal with the faulty faucet when Malcolm got back into town.

Damn!  Just my luck the sink faucet died while Malcolm was gone. With a heavy sigh, I prepared myself to clearing out the underneath junk pile of trash bins, scrubbers, rubber gloves and cleaning supplies, crawling on my back to hunt for the turn-off valve.  I was going to have to deal with replacing the faucet on my own.

Another splash, louder this time, had me turning around to glare at the offensive faucet.  Only the faucet was dripless.  Dry as bone.  Nothing.  Nada.  No drip.  No mess.  Nope the problem wasn’t with the leaking faucet, but rather with the girls.  Both of which were obsessively oozing dog drool, while eagerly waiting for their kibble feast.

Dogs drool.  There’s no getting around it.  They drip, dribble, drop, drivel and drool.  Boy, do they drooooool.  One large, dog infused drip  at a time.  Times two.  Amore and Dolce both are droolers.  Both are heavy slavers. Malcolm and I have dealt with dog slobber and wet spots going on near seven years.  Ten if you include Tiamo in the mix. 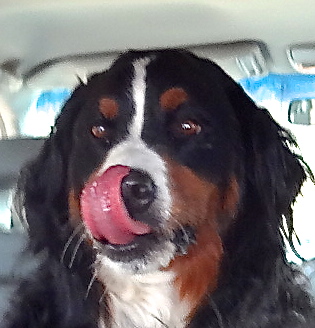 We have learned to discretely wipe our drooled upon hands against our jeans before greeting friends and acquaintances.  We have quickly positioned couch pillows over pools of moisture when guests go to sit on the sofa.  We have become adept at hiding all slobber evidence. We have mopped more floors than the average housewife and we have changed clothing more than a super-model on the runway.  We keep hand sanitizer in every room and in the car.  Dog drool does that to a  person.

There are two things I am thankful for… The first being, we have brick floors throughout the house.  It’s an easy clean.  And second, Malcolm got to deal with the faucet!